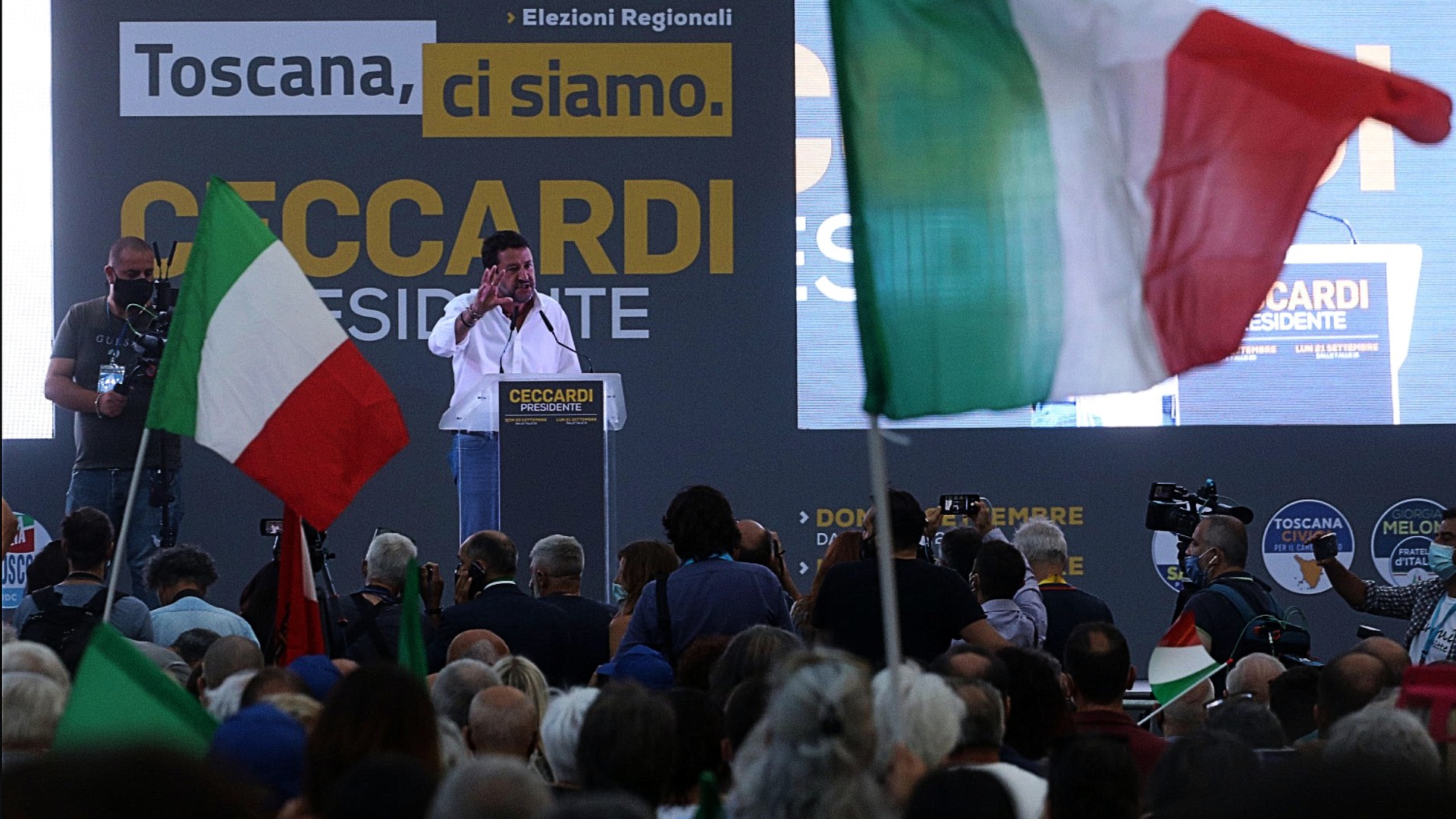 An important regional electoral round took place in Italy on September 20 and 21 for Veneto, Liguria, Marche, Toscana, Puglia, Campania and Valle d’Aosta.

In Italy, the regions are more or less equal to the states in America, but with less powers. Among the seven regions in the election were the second in national economic importance (Veneto), the one with the first Italian naval port (Genoa, in Liguria), and the one with Naples, the “symbol” city of the South (Campania).

Immediately after the elections, the Italian newspapers began to repeat that for the center-right (roughly comparable to the U.S. Republicans) it was a defeat. In particular, it would have been Salvini’s League (which in the center-right occupies more or less the space than Trump’s base in the Republican party) to suffer the worst defeat. At this point “the osmosis factor”, so dear to the left-wing press, was inevitable: American left-wing journalists, who only read European left-wing newspapers, began to say that the Italian conservatives were defeated.

Too bad that the dreams of radical chic sitting in their golden East Coast palaces do not correspond to the truth.

In Veneto, we saw an avalanche victory of the incumbent Governor Luca Zaia. The undisputed leader of the League in the region was reconfirmed with 76.79 per cent of the vote—an absolute triumph for Salvini and the entire Venetian League.

The center-right Governor Giovanni Toti was confirmed with 56.13 per cent of the vote. Toti, though not a member of the League, is formerly of Berlusconi’s Forza Italia party and is now an independent figure of the center-right.

An important element is that Liguria has always been considered a “dancer” Region (swing state). This means that the Ligurian center-right has given a demonstration of good governance and that the electoral result has left the Ligurian left with broken bones and strong internal controversies.

The incumbent left-wing governors were reconfirmed in both Puglia and Campania. Like Liguria, these are two “dancing” Regions in which the strong personality of the governors made the difference.

The only drawback for the left is that the Puglia branch of the League collected a decent 9.57 per cent and got four officials elected. This is noteworthy given the League’s presence in Puglia was nonexistent a short time ago.

In Campania, the victory is solely thanks to the Governor De Luca. De Luca is a politician of national importance; a veteran of the old communist left but also in favor of “law and order” policies. This often places him in conflict with the leadership of the Democratic Party to which he belongs, a situation vaguely reminiscent of that of the Democratic Governor of Louisiana in the U.S.. De Luca’s reconfirmation will create many internal problems in the Democrat Party’s political secretariat.

In the deep red region (in Europe red is the political color of the left and blue is the conservatives) the candidate of the League was defeated by the left-wing Governor. A Salvini victory in Toscana would probably have caused the fall of the government in Rome, but it was a very difficult battle. If we compare to the U.S., Toscana is the political equivalent of Massachusetts. However, even here, the League goes from 17 per cent five years ago (the duration of the Italian legislatures’ term) to 22 per cent today.

The best victory of the center-right was in Marche. Veneto was an expected triumph for the center-right (it is the most conservative Region in Italy), but the left’s loss of Marche was a bad blow.

In this historically red region, the crisis of small artisan factories has gradually eroded the consensus of the former communists, with a shift of voters comparable (in microscopic versions) to the southern “triumphal defeat” of Barry Goldwater in 1964. The loss of Marche was so hard that the Italian left-wing newspapers, and consequently not even the New York Times in the U.S., simply do not mention it.

For the record: in this Region the new Governor is not from the League, but the League is the lead party in the center-right coalition with 22.38 percent—a huge growth from 13.02 per cent just five years ago.

In the very small Region—it’s the Rhode Island of Italy—people vote differently. Here the voters do not choose the Governor directly, but elect the regional parliament, which appoints a regional council based on the balance of power. To date “the games” have not yet been made, but the League is the first party with 24 per cent of the vote.

What overall evaluation can we give to these important regional elections? The numbers, cold and detached, say that the conservative coalition is advancing and tearing up a former left-wing fiefdom.

Obviously, the numbers alone cannot explain the electoral trend and expectations of recent years. The left, to hide yet another defeat, sings victory saying that it could have been much worse. Though it is true they limited the damage, the fact remains that they were defeated.

The right, on the other hand, pays a small sin of pride: convinced that it is going to meet yet another triumph, it was partially disappointed by a simple victory. This scenario creates a dichotomy between real and perceived results.

The real result is that Matteo Salvini’s League goes from 46 to 74 regional councilors throughout Italy, maintains all the Regions where it governed, wins one historically left-wing Region, and, compared to five years ago, grows everywhere (Liguria is the only exception: there the League drops from 20 per cent to 17 due to a small transfer of votes to Governor Toti’s personal party).

In the perceived result, however, the left avoids the electoral massacre. According to liberal and radical chic newspapers (cousins ​​of the American media that hyped Donald Trump’s Russiagate) this is enough to sing victory. Obviously the politically aligned press does not seek to tell the truth, but tries to explain and construct the truth.

We know the left: not much has changed since Orwell’s Ministry of Truth.

The very fact that the government declares itself strengthened by this umpteenth defeat speaks clearly: the parties that currently hold power fear more than anything else a return to the vote, since they know very well that they would be swept away by the voters. Better, therefore, to “resist, resist, resist”; waiting for a miracle that will not come or, alternatively, leaving the economic rubble and social discomfort to the next government led by the League. In the latter case, the historical parallelism with what Nixon inherited from Democrats is glaring.

But the Italian people, election after election, are turning their backs on our version of the East Coast radical chic. The Italian people, progressively but inexorably, are entrusting their dreams and hopes to the representatives of a virtuous, Atlanticist, and pro-American conservatism. Simple and wise men and women, almost always children of the middle class. Men and women who, as Ronald Reagan never forgets, dream and see “the city on the hill”.

Fabio Bozzo is member of the Lega since 2001 and former regional youth coordinator of Liguria. He is the author of four books on history and geopolitics, including “Da Pontida a Roma. Storia della Lega”, with a preface by Matteo Salvini.