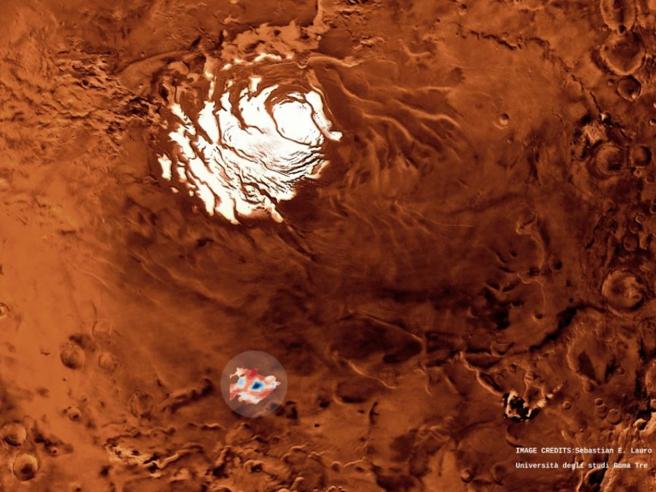 A new network of saltwater lakes has been discovered on Mars using Mars Advanced Radar for Subsurface and Ionosphere Sounding (MARSIS), according to a study published in the Nature Astronomy journal.

The lakes, located under ice at the South Pole of Mars, were identified by a team of Italians led by Elena Pettinelli and Sebastian Emanuel Lauro of the University of Roma Tre, alongside Roberto Orosei of the National Institute of Astrophysics (INAF). The same team discovered a saltwater lake two years ago in a similar location.

“Compared to 2018 we have greatly expanded the study area and used a different method of analysis, now the data indicate[s] that there is a larger water system,” Pettinelli told ANSA. In 2018, research was only conducted on twenty square kilometers of Mars. Now, the area in question is 250 by 300 kilometers. Conducting research on a much larger area of the planet in combination with “the fact that there are complex hydrological structures suggests that there may be others,” she stated.

Enrico Flamini, president of the International Research School for Planetary Sciences at the University of Chieti-Pescara and member of the 2018 research team, explained that the 2018 finding “was only the first evidence of a much larger system of liquid water bodies in the Martian subsoil.” He says the results of the new study “is exactly what I would have hoped for, a great result, really!”

“The discovery of an entire system of lakes implies that their formation process is relatively simple and common, and that these lakes probably existed for most of the history of Mars,” Orosei, the scientific director of the MARSIS radar, added.

The MARSIS radar—designed under Professor Giovanni Picardi of the University of Rome “La Sapienza”—is a ‘radar sounder’, meaning it functions at incredibly low frequencies: between 1.5 and 5 megahertz. MARSIS is the only radar capable of reaching five kilometers below Mars’ surface, and was supplied to the research team by the Italian Space Agency (ASI).