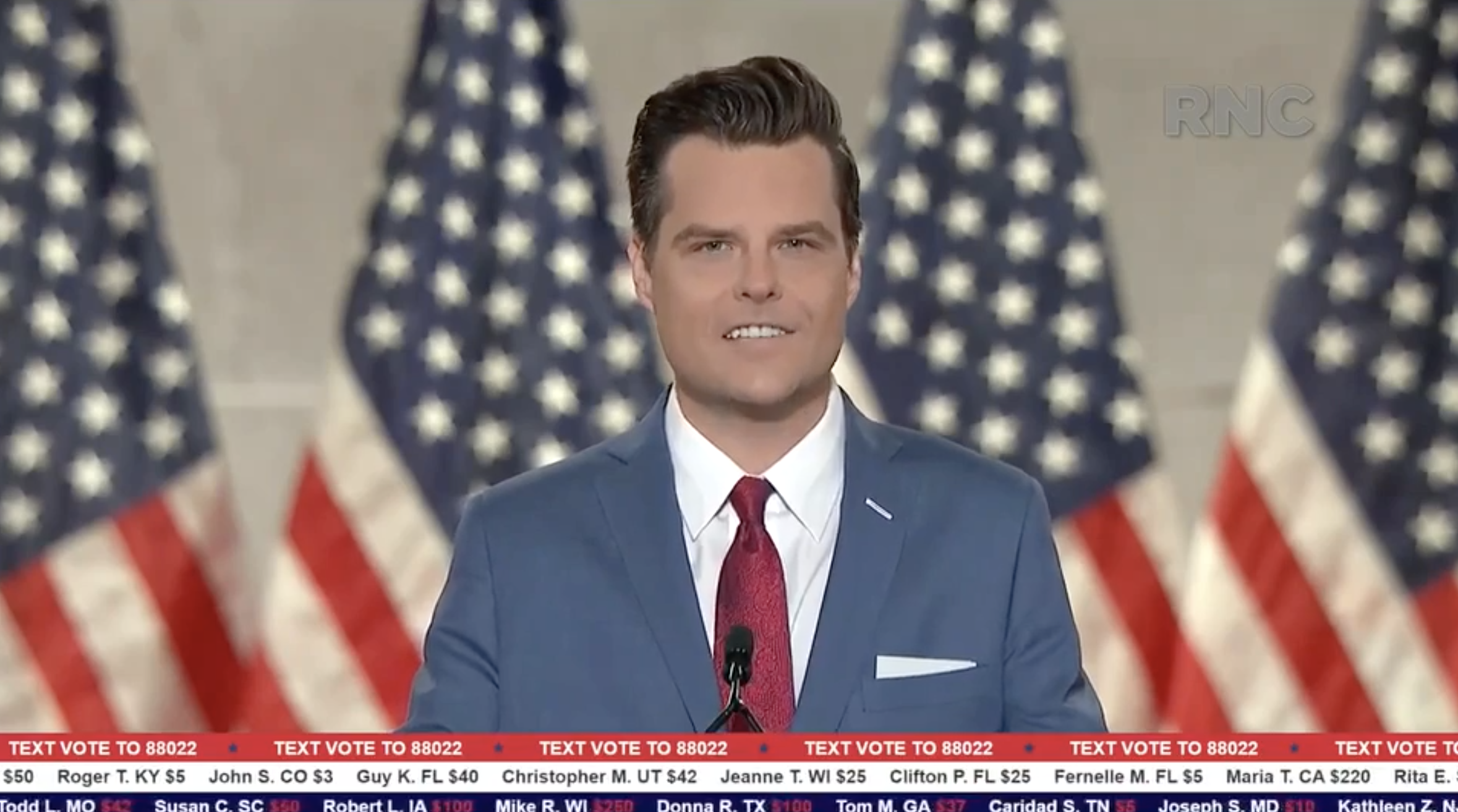 “I’m speaking to an auditorium emptier than Joe Biden’s daily schedule,” Florida Congressman Matt Gaetz opened his speech at the Republican National Convention, which was barred from having a live audience courtesy of the China virus.

“We are a nation of full hearts, and clear mind. We see the choice clearly,” the Trump-ally contrasted the names on the ballot this coming fall: “strength or weakness; energy or confusion; success or failure.”

Gaetz, known for his anti war stances, praised President Trump for being “the first President since Reagan not to start a new war. Biden has foolishly cheerlead decades of war without winning, without end. President Trump knows we are strongest when we fight hardest not in distant deserts, but for our fellow Americans.”

“We must fight to save America now, or we may lose her forever,” he emphasized. “Joe Biden might not even notice.”

The Florida Congressman cited the ‘Settle for Biden’ movement propagated by the Alexandria Ocasio-Cortez wing of the Democrat party. He asserted that “the ‘woketopians’ will settle for Biden because they will make him an extra in a movie written, produced, and directed by others.”

“It’s a horror film, really. They’ll disarm you, empty the prisons, lock you in your home, and invite MS-13 to live next door.” Gaetz went after the Democrat-led movements to defund and disband the police: “Blaming our best and allowing society’s worst…Nightmares are becoming real. Cops killed. Children shot.”

Another target of the congressman’s speech was vice presidential candidate Kamala Harris: “A state that cannot keep power running for its own people should not send its junior senator be vice president.”

“Appeasement is never a winning strategy,” Gaetz, who won his district’s primary with over 81 per cent of the vote. “We won’t settle for violence in our neighborhoods or at our border. We won’t settle for decades of bad decisions by basement-dwelling Joe Biden.”

“Washington, Lincoln, and Jefferson are immortal precisely because of the pull they have on our imagination. You cannot cancel a culture that loves its heroes,” he stated. “America is the greatest country that has ever existed. Don’t let any celebrity, athlete, or politician tell you otherwise.”

Gaetz’s speech was hailed immediately after its conclusion as a “highlight” of the night on Twitter.

Many expressing a positive response to the overall convention admittedly expected “so much cringe.” However the much contended Nikki Haley speech still to come…And it is only day one of four.