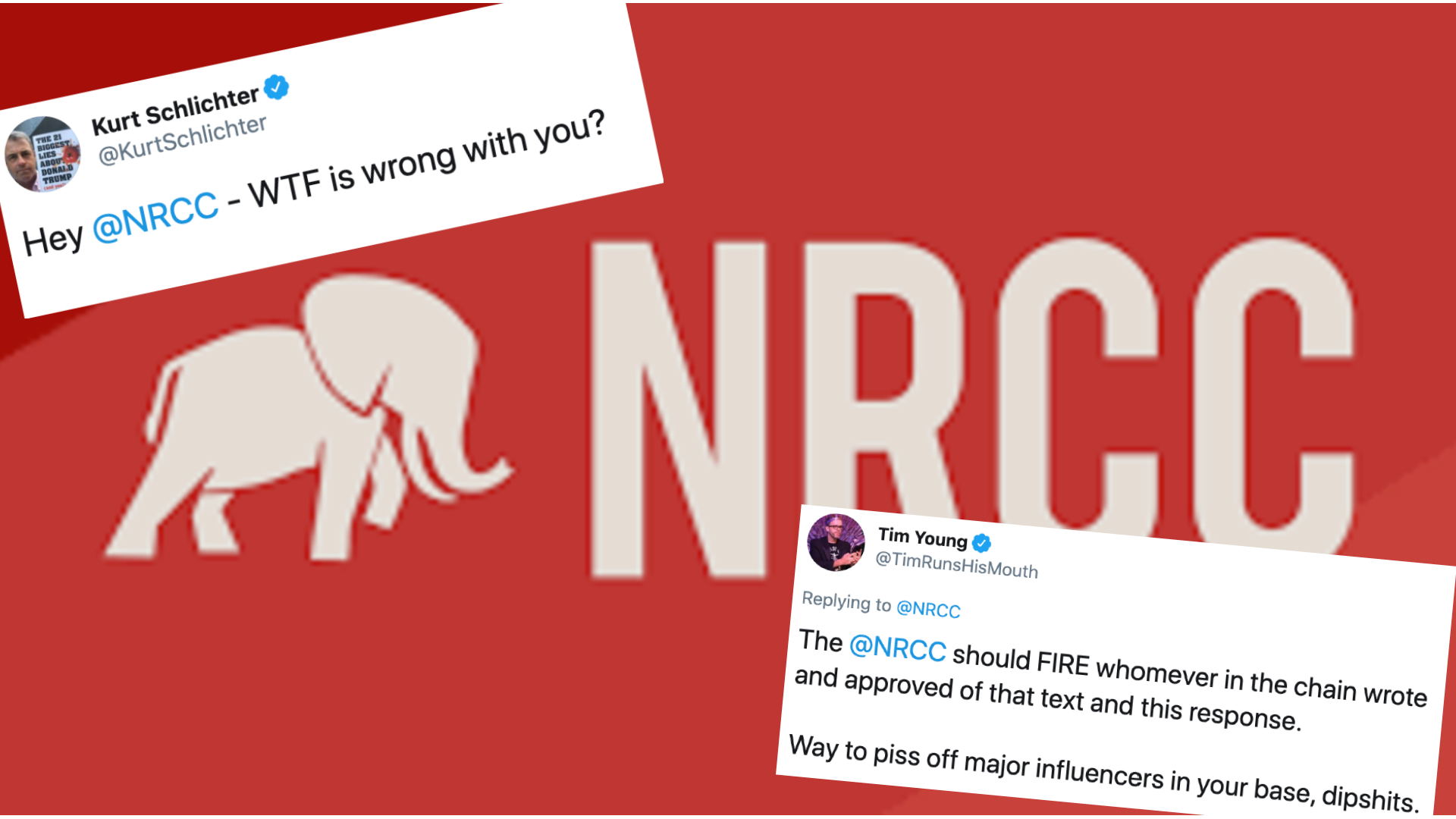 The NRCC and other Republican-linked organizations have faced a multitude of backlash on Twitter over texts that seem to reprimand voters and donors rather than encourage and thank them for their support. Even the Trump campaign faced some blowback, until it was clarified the text was not from them.

The text Schlichter and others received from the NRCC was found by many to convey a negative tone: “We texted you TWICE. Why did you let your 500% Trump House Patriot match expire AGAIN? We’ll give you one more chance.”

“WTF is wrong with you?” Schlichter asked the organization.

The NRCC clapped back on Twitter in a similarly condescending tone: “This text raised $198,021 toward electing conservatives to Congress. But we’ll certainly pass your complaints on to our manager, Karen.”

Schlichter appealed to his nearly 280,000-strong following to hold the NRCC accountable: “Don’t forget to let the @nrcc know what you think about their ‘Shut up and obey’ messaging.”

Chris Pack, the NRCC’s communications director, replied to the tweet, asking Schlichter, “who hurt you?” The Townhall columnist told Pack he spoke to his deputy and received similar “attitude.”

“You need a hug,” Pack told Schilchter, who immediately roasted him and the entirety of the NRCC into oblivion: “No, what I need is a competent and capable @NRCC that understands how to do it [sic] freaking job and win this election, instead of bunch of DC schmucks feathering their own nests and ensuring that they maintain their jobs no matter how shitty their performance is. That’s what I need.”

Schlichter is not the only big naming going toe to toe with the establishment. With him from the beginning is former NYPD officer John Cardillo, who has over 250,000 followers himself. Cardillo laid all of the NRCC’s mistakes out for them in a single tweet directed at the deputy communications director and the organization itself.

“A. Your digital messaging reads like a mob shakedown. B. Don’t dare lecture us about conservatism. You gave us Justin Amash. C. Pretty stupid speaking this way to actual conservatives who enjoy millions of social impressions daily.”

Author and CEO of American Majority Ned Ryun replied to the NRCC’s “Karen” tweet, calling out their poor ratio of replies to retweets, and their poor function as an organization overall.

“Way to get ratioed BTW,” Ryun wrote. “And spare me the whole ‘we’re electing conservatives.’ I’m not an idiot. I’ve been around this town almost 25 yrs. I guarantee most of that money is going to candidates who are in fact not really conservatives, but more the puke establishment kind.”

Author and host Tim Young also joined in, calling for the NRCC to “FIRE whomever in the chain wrote and approved of that text and this response. Way to piss off major influencers in your base, dipshits.”

Most notably, Fox News’s Tucker Carlson, host of the highest-rated cable news show, chimed in when the NRCC called Schlichter ‘Karen’: “Anyone know why the NRCC is using ethnic slurs?”

Schlichter then extended an olive branch…with some terms and conditions attached: “So, @NRCC, maybe it’s time to bury the hatchet… But first, I need you to tell me exactly how much money you took in this cycle and how much you have given to congressional candidates. Real simple. Two numbers. We’re waiting.”

Given the pressure from an ever growing list of influential conservatives, the NRCC has found themselves at a crossroads: do they continue to double and triple down on their snarky attitude, or start to walk back how they address their voters and donors?