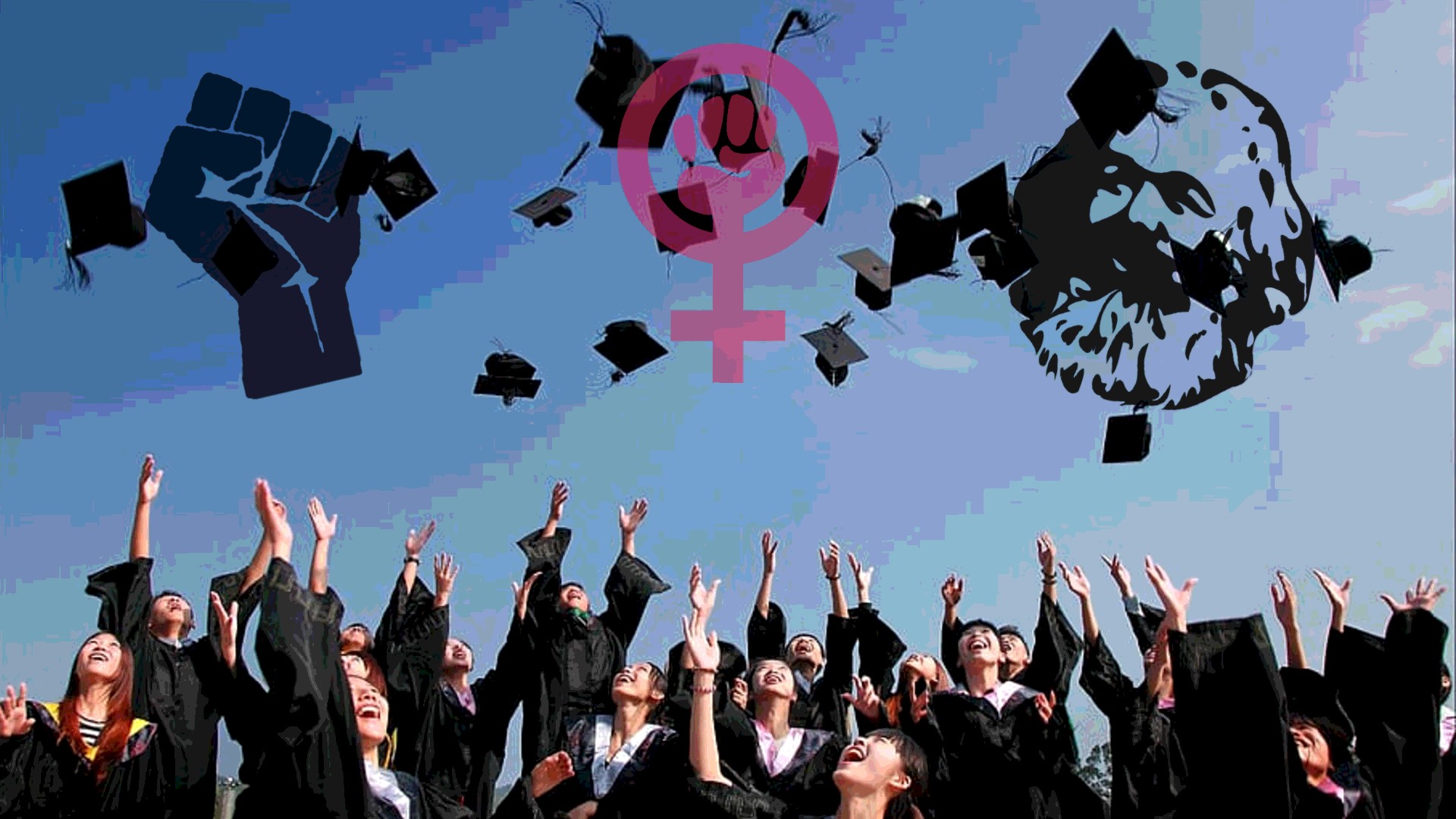 College is, quite frankly, a waste of time and money.

Once an esteemed institution of higher education that prepared the youth to teach how they were taught and lead how they were led, college is nothing more than a joke nowadays.

Students used to be taught about the greatness of America and her values. This curriculum has been replaced with one that encourages hatred of America, promotes Marxism, squelches individuality, and partakes in mob rule and groupthink.

We should not be praising, funding, or attending institutions that actively work to undermine our country and her values.

Originally meant to further one’s education in certain fields including medicine and law, colleges and universities offer courses and degrees in everything but partying—officially, that is.

Now one can graduate with a degree in politically motivated topics such as gender and women’s studies, pushing feminism, liberal policies, and biology-defying genders onto students.

What’s more, the college curriculum is literally a joke.

Notably, the University of California at Berkeley and the University of Texas at Austin went as far as to create a “meme studies departments,” offering courses in “memeology.” At UC Berkeley, courses in this department include MEME 10: “Pepe, Dat Boi, and Kermit: Frogs as a Symbol of Vulnerability” and MEME 20: “aN inTrODucTioN tO SpOngEBob ThEOrY.”

Berkeley Professor “Meme Lord” (yes, you read that correctly) explains: “The campus and I believe that studying the mechanisms by which we come to construct, and in some cases deconstruct, such seemingly simple images is key to understanding the nuances of adolescent communication.”

It is not only the curriculums themselves that indoctrinate the students. Teachers, the majority of whom are left-leaning, advance their political stances onto their students, often skewing opinion as fact.

An associate professor of business management at Brooklyn College Mitchell Langbert conducted a study which found “78.2 per cent of the academic departments in [his] sample have either zero Republicans, or so few as to make no difference.”

Langbert sampled 8,688 professors holding PhD’s at fifty-one of the sixty-six highest ranked liberal arts colleges in the United States. He found that the ratio of Democrat to Republican professors was just over ten to one.

However, Langbert explained that “because of an anomaly in the definition of what constitutes a liberal arts college in the U.S. News survey, I include two military colleges, West Point and Annapolis.” If you exclude both military academies, the ratio increases to just shy of thirteen Democrat professors for every Republican.

No, it does not matter the political ideology of a professor if they are keeping it to themselves and teaching their courses fact based and opinion free. But that is not the case.

There are a multitude of incidents across the nation where teachers have spoken and acted upon their biases. For example, William Penn, a creative writing professor a Michigan State, threatened students: “I am a college professor. If I find out you are a closet racist, I am coming after you.” He also referred to Republicans as a “bunch of dead white people, or dying white people.”

The only improvement in higher education over the decades is the ‘college experience’ as it relates to partying. But I highly doubt parents are willing to pay tens of thousands of dollars per year (plus the cost of alcohol and other not particularly legal substances commonly found in frat houses) solely for the purpose of their children getting an education in beer pong.

While the quality of education continues to plummet, the bill for the four year long party we call ‘college’ is only growing—mostly thanks to taxpayer subsidies.

Why is the American taxpayer subsidizing what is, in its simplest form, a liberal activism bootcamp?

Former Fox Business host Trish Regan took to Twitter to express her concerns on the matter: “Universities doesn’t [sic] deserve any big tax breaks. The education INDUSTRY (and ‘industry’ it is) needs a total redo. TAXPAYER subsidies have helped colleges charge sky high tuition to indoctrinate young people with only one view of the world. Time to #CancelCollege!”

She expanded on the raised tuition shortly after, tweeting: “US TAXPAYER [dollars] are helping to subsidize institutions that pray upon young people who don’t quite yet understand the significance of borrowing 100s of thousands of dollars! Enough.” Regan liked the students loans to the “subprime home loans that let to [the] 2008 meltdown.”

After watching Millennials saddled with student loan debt they struggle to repay for decades, Generation Z is turning down the college scam.

Just because younger generations are opting to pass ‘go’ on college, does not mean they are not partaking in an alternative form of higher education. Instead, many are attending trade school—a much more efficient and practical use of their money.

Vice reports that “for decades, technical and vocational schools have been falling out of favor, as more and more people opt for getting advanced degrees at four-year colleges. But recently, with the job market over-promising and underpaying, the trend has begun to reverse: States have started to reinvest in trade schools. And the generation inheriting volatile job prospects, a gig economy, and contract pay is following suit.”

They explain Generation Z is “more often turning to trade schools to avoid the skyrocketing student debt crisis and hone skills that translate directly into jobs, from electrical engineering to cosmetology. While the power of trade unions has dwindled, and societal value still favors more elite professions, young students are finding themselves drawn to stable paychecks in fields where there’s an obvious need.”

On top of all of the aforementioned, the COVID-19 pandemic forced schools to transition online for the remainder of the spring semester and possibly the upcoming fall. Even Harvard has reverted to online attendance—though it still comes with a price tag upwards of fifty thousand dollars.

This is leaving many students, parents, and government officials questioning the need to attend college in person—or at all.

If students can complete the entirety of higher education online, is there a need for them to ever return to campus? Parents are beginning to question the system: if their children can complete their courses at their own pace, without even leaving their bed, why are are they paying such a hefty price?

This concept completely negates the entire ‘college experience’ argument as well, not that it was a hill to die on in the first place.

Between the recent executive order signed by the President that prioritizes one’s skills over their degree in federal hiring and Trump’s tweets revealing the Treasury Department will be “re-examining” both universities’ tax-exempt status and federal funding, it is safe to say the nation is moving in an increasingly college-skeptical direction.

Though a degree held weight and accompanied merit in the past, the present tells a much different story. Americans should not be subsidizing, populating, or in any way elevating institutions that are instilling values in our youth that directly contradict those of our nation.